Brigham and Women's Hospital (BWH) and Massachusetts General Hospital (MGH) are located in Boston, Massachusetts, affording our residents access to the many amenities of Boston and New England.

BWH sits right at the border of Boston and Brookline. MGH is located in Beacon Hill. Boston is made up of many small neighborhoods, each with their own personality (see Where Our Residents Live section). The city is full of parks that are beautiful in all four seasons. Boston is a very walkable and bikeable city, and a car is not necessary. The subway/trolley system (called the “T”) has a stops right next to BWH ("Brigham Circle") and MGH ("Charles Street/MGH"). 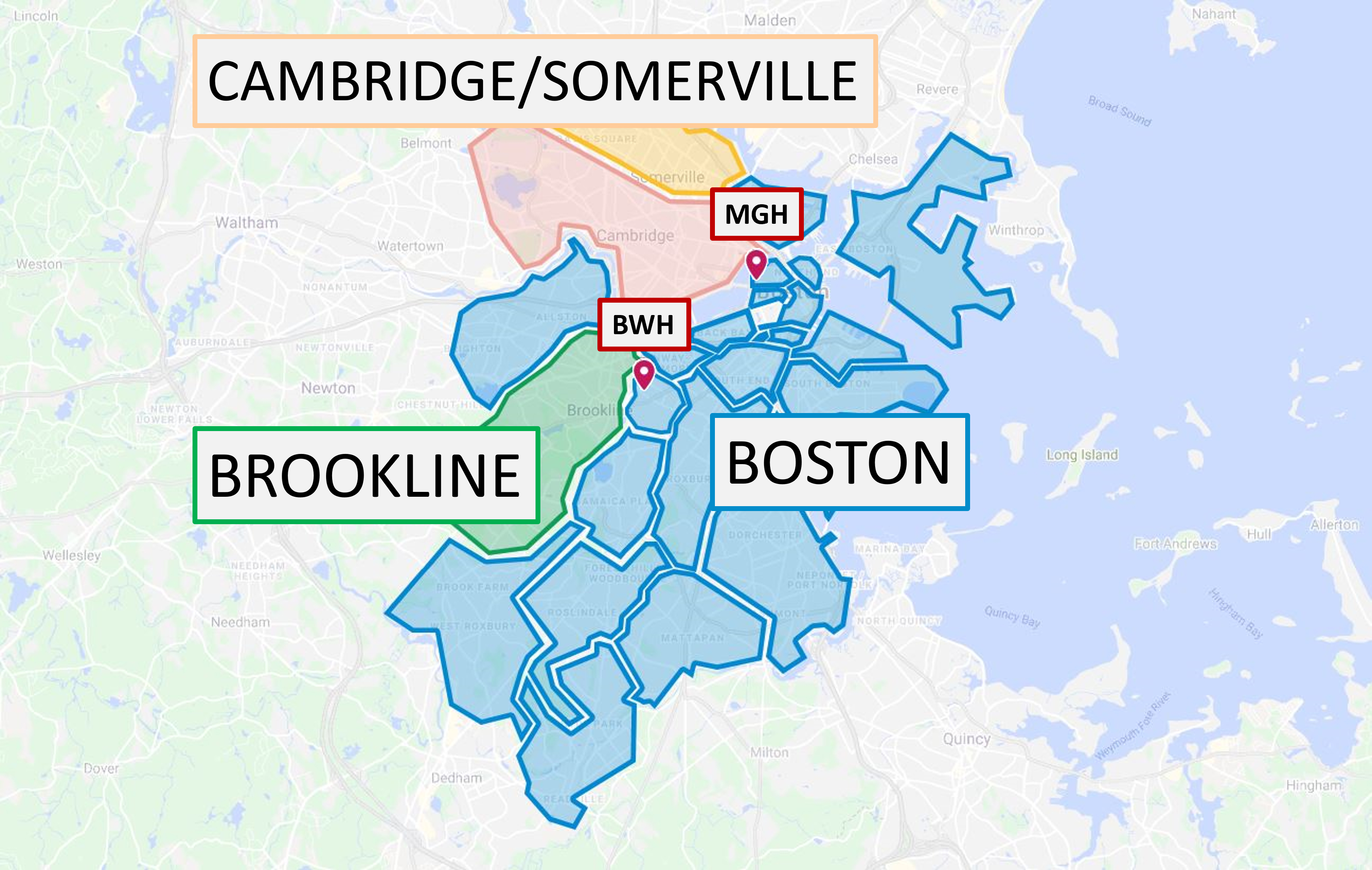 Boston is a cosmopolitan city of contrasts: neat rows of red brick town houses stand side by side with high-tech towers.

In addition to our historic neighborhoods, Boston houses some of the most well-known landmarks that shaped our country’s history. Embark on the Freedom Trail and learn first-hand about the Battle of Bunker Hill, the Boston Tea Party, and the U.S.S Constitution.

Boston has some of the best public playgrounds and inner city splash parks the east coast has to offer. With over 2000 acres of park space, from tiny tot slides to giant jungle gyms, you will likely find an amazing park to fit your family needs. In the winter time, the entire city joins in on the holiday spirit and you can enjoy ice skating, sledding, and festive strolls down many of our historic neighborhoods.

More than 100 universities and colleges make their home in Boston and their influence is felt throughout the area. These institutions have extensive libraries, museums and special events.

The Boston Pops and the Boston Ballet are mainstays of the performing arts. The Museum of Fine Arts, the Gardner Museum, and the Institute of Contemporary Art are just a few of the world-class art museums located in the city.

World-class institutions like the Boston Children's Museum and the Museum of Science (with its four-story Omnimax Theater) can nurture your child’s curiosity and keep them entertained all day. If you’ve got an animal lover on your hands, Boston sports two amazing interactive zoos (Stone Zoo and Franklin Park Zoo) as well as the New England Aquarium. These attractions are all accessible by MBTA public transit.

Bostonians have four major-league sports teams: the Red Sox, the Celtics, the Bruins and the Patriots. Fenway Park, one of America's oldest baseball parks, is located in the heart of the city.

For those who are animal lovers, Boston has plenty to offer in regards to pets! The Boston Common has 50 acres of land that pets are welcome to stroll through. The Common also has many designated off-leash areas where it is almost impossible not to see charismatic canines playing and interacting with each other. Walking through Boston Public Gardens or Boston Common, you sometimes wonder if the pet population outnumbers the human population! For the beach pups out there, after Labor Day, many of the beaches are welcome for all pets to enjoy.

What about our feline friends? Truthfully, many of our residents, attendings, and PAs are cat owners and love their furry felines! Because cats can be so self-sustaining, many of our cat owning residents avoid any catastrophic (pun intended) time constraints during residency.